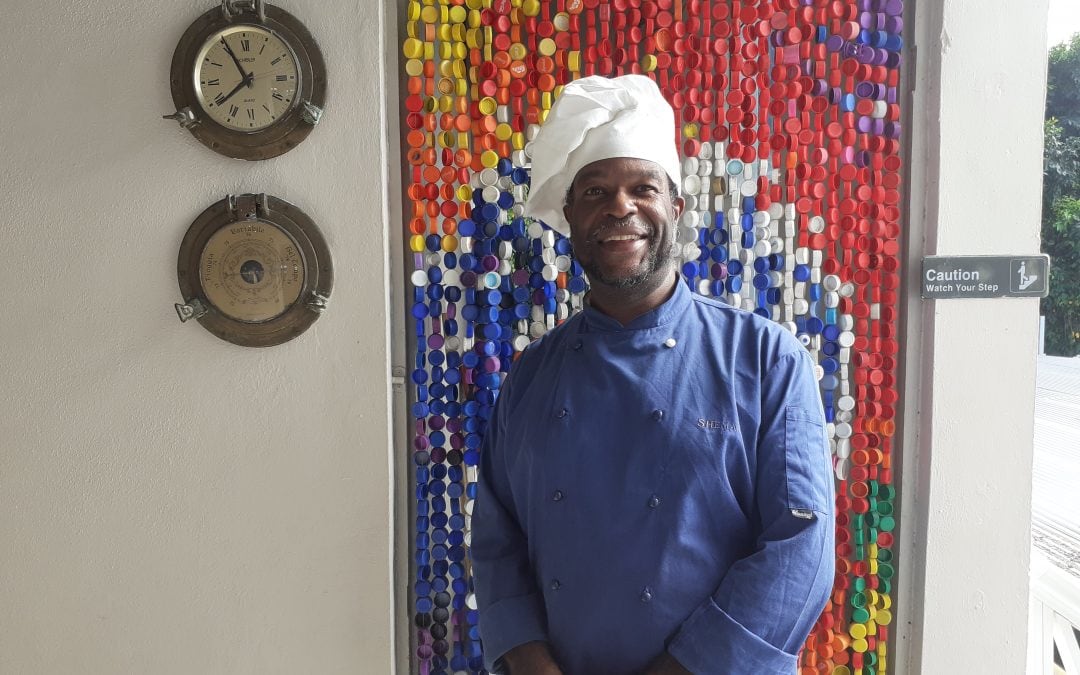 Chef Kevin was very busy in the kitchen when I arrived to interview him. There was an amazing fresh garlic-y smell infiltrating the restaurant area from the kitchen. He was finishing up making a garlic herb butter which he showed me and said he would join me for the interview asap. 15 minutes later he appeared in his chef’s hat ready for the photo…. 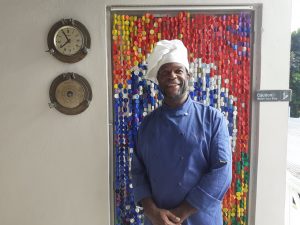 What made you decide to become a chef?

I always liked cooking and enjoyed it and found it fascinating since a child and always around parents adopted grandparents  I grew up in Fond St Jean near Stowe and Petit Savanne in the south  – there’s a little hamlet above it called Fab. It’s a small village where everyone is your aunt or uncle. 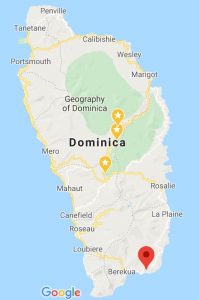 As a kid it (cooking) was something we had to learn-  as first of 5, left by parents so they could work overseas you learn fast – in the home/hostel I grew up at age 9 I was cooking for 15 people in household.

When I was about eleven, I got a job washing pots, beating the cake, learned how to make pastries etc. locally on the weekend and after schoolwork and home economics. I have always had that love for cooking.

I grew up fast, it was encouraged not as a vocation or career but useful to contribute to the household, yet I still had to do the dirty work i.e. cleaning and sweeping etc.

I asked Kevin if there was a rota so that chores were shared, he said not really…

There were only verbal rotas so as non-blood child, I did the hard graft. I was the male version of Cinderella.

Are you the classic grumpy chef everyone fears, it doesn’t seem like it?!

Some people are a bit afraid of me. I must be in a good mood. I can snap in and out of it. Creative people, we want to be left to our own devices, but we still have employers and must keep them happy. So slowly we manage to get our employers to let us do what we want more. I prefer a menu that’s less conventional because I have ideas and like to create. I cannot maintain a standardised menu. I like getting the leeway of being able to be creative and change the menu to get variety in our lives. Hotel guests love it. It works well in Dominica because of some produce being available at different times.

So is your family still spread around like a lot of people here?

Tell me something funny

Once was making gourmet style my way bread pudding – there were two jars both with white stuff in it. Just grabbed and didn’t taste – big mistake – lost all that LOVE when I tasted it just before it went in. I’d put salt instead of sugar. So glad I didn’t waste time baking it!

Also I was 19 I went to work at a small hotel resort in the BVI’s and I was making pumpkin soup and it was suggested I put cinnamon in it. I stirred quite a lot of dried powdered cinnamon as it didn’t smell or taste like cinnamon. That was when I learned that herbs and spices in powder form is much stronger. We fixed it but adding more pumpkin and coconut milk. Then it turned out great. I hadn’t encountered using dried herbs for cooking until then (only for baking).

What’s your favourite item on the menu?

I have no favourite on the menu because menu changes so much but I do love Italian and French, especially Mediterranean food.

I over 20 years with Asian, French, Italian, Spanish and American chefs then went to culinary school because I was asked to. That was to a certificate. Instead of 4 years I did fast track as already had experience so did it in 2 years – at Johnson and Wales University in Providence Island.

Come join us for a delicious meal any time Thurs-Sunday unless you’re staying at the hotel then it’s whenever you wish….  and we are now also offering take-out of part of the menu.

We look forward to seeing you soon!

P.S. here’s my current favourite item on the menu… Thai Coconut Shrimp on a bed of sauteed vegetables, Avocado and Papaya Accra. 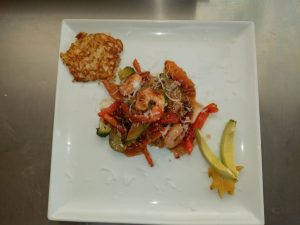