How long have you worked here? Since November 25th 2010, it was Thanksgiving which is how I remember so precisely. Things have changed since the departure of Ross. I used to have to work late more often, so it was a late night on Thanksgiving but that doesn’t happen these days.

What’s your favourite item on the food menu? Pork loin with peppercorn sauce

How far away do you live? Lagoon at the end by Purple Turtle – this it the far end of Portsmouth and Purple Turtle is a popular beachfront bar and restaurant…so i just get a short bus ride and walk up the hill to come to work. 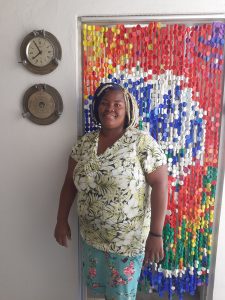 Sabrina in front of the re-purposed plastic bottles curtain

What’s your favourite spot in Dominica? I like Purple Turtle’s beach parties (these happen most Sundays). I went to the parade for Carnival which was really fun this year. Last year I didn’t go because I had a small baby who is one year old now, so doing things like that is a bit easier.

We were sitting in the dining room during the interview and were interrupted by a hotel guest who had a piece of plant in his hand that looked like LionTooth and he was asking for Aloe Vera, she said she would get him some in a minute when done with the interview. I promised not to take much longer. The next thing she was going to do was going to do would be to show the guest which plant was the Aloe Vera and make sure he had a piece.

So you like helping guests? Yes I really do, but it’s funny because some guest come from another world and are used to getting everything NOW i.e. immediately, things are more developed where they are from. We are used to island time and we help them get used to it too. We work with what we have.

I stated that some things at the hotel were pretty awesome, like the chairs that hang from the tables  in the dining room instead of being on the floor, making it easier to clean.

Sabrina: Yes, there are so many improvements that have been made like that and the shade blinds make a big difference in the restaurant. It was really an experience – us staff – me and two colleagues walked from our homes in Lagoon to the hotel the morning after the storm, through all the wreckage and helped re-build from that moment on.

We are sure you will enjoy meeting Sabrina when you visit or remember her well from your stay.