On a quiet early saturdaymorning walk you might have the luck to catch a glimpseof some fishermen taking in their nets. Most generally, Dominica fishermen rely upon small boats ranging from hand crafted boats carved from a single tree trunk by the native KalinagoIndians to small row boats, to slightly larger boats powered by single, 40hp outboard motors or less. Dominica fishermenuse fish nets, fish pots, spears and go out in their boats for the bigger fish.

The smaller, man-powered boats are seen daily bobbing, most generally a quarter to half a mile from shore.Using hand lines, these fishermen seek anything that will take their bait from barracuda, garfish, wahoo,snapper and other. Other fishermen can be seen checking fish pots. They go out in the sea and drop the fish pot in the ocean to come back next day or a few days later to pick their catch, many times they findlobster in the pots.Lion Fish are hunted with spear fishing. Most of the time by divers or free divers. If you come for a dive holiday this will be one of the options for you to learn! 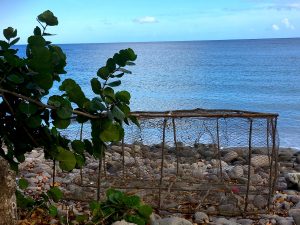 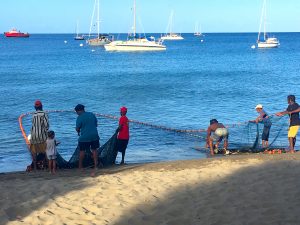 Close to shore, others  set and pull large nets to catch blue robinsand other hand-sized fish that swim close to shore in large shoals.What cannot be observed is those fishermen who have ventured 5 to 50+ miles off shore, in their single engine boats. They are seeking big fish,blue marlin and tuna.Leaving before daybreak, these brave men take their passions “out there.”You can buy fresh fish at the Fish market (where they will cut and clean it for you) or straight from the fishermen at the beach or the side of the street.We prefer to buy our fish from the fish market in Roseau where we pre-order and geta nice piece of fresh fishfor our guests!

No better treat then a fresh caughtseared tuna @ Hotel The Champs… 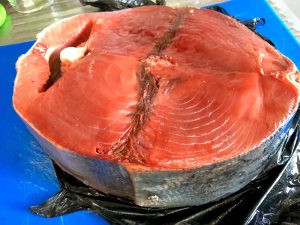 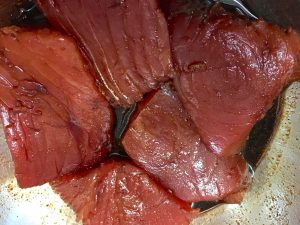