MORE FLIGHTS TO THE NATURE ISLAND DURING WINTER 2019 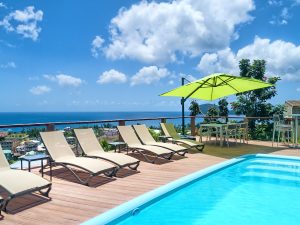 The idyllic charm of Hotel the Champs awaits our guests as increased flights are expected into Dominica during the high season.  According to a release from Dominica’s tourism officials, airlines serving the island began adding flights in October and the increases are expected to remain in place into 2020.  These new flights and schedule changes will make traveling to Dominica and Hotel the Champs much easier over the coming months.

French airline, Air Antilles added new routes and flights into both of Dominica’s airports effective October 25, 2019.  The airline’s Twin Otter service will offer flights into Canefield Airport four-times-weekly from Guadeloupe.  These flights depart Pointe-A-Pitre for Canefield at 4:25 pm allowing passengers from Air France, Air Caraibes, Corsair and JetBlue to conveniently connect into the island.  Air Antilles’ ATR service from Pointe-A-Pitre operates daily with a morning arrival into Douglas Charles with onward connections to St. Maarten (Princess Juliana International) and San Juan, Puerto Rico.  This flight returns in the evening connecting back to Point-A-Pitre.  A new route on the ATR service is a three-times-weekly flight from Fort-de-France, Martinique into Douglas Charles Airport.  This new service operates on Wednesdays, Saturdays, and Sundays and also continues to St. Maarten and San Juan.  Air Antilles has codeshare/ interline agreements with Air Caraibes, Air France, Corsair and Winair.

In October, Leeward Islands Air Transport (LIAT), added three flights to its service to Douglas Charles Airport, bringing the airline’s weekly total to twenty-eight flights primarily from hubs in Antigua and Barbados, connecting Dominica to the region and beyond.  LIAT has interline agreements with JetBlue, Virgin Atlantic, and British Airways.

In addition to these airlines, travelers to Dominica can connect into the island on interCaribbean Airways, Windward Island Airways (WINAIR), and Air Sunshine, as well as via the fast ferry services offered by L’Express des Iles and Val Ferry.  More information about air and sea connections into Dominica can be found on our How to get to Dominica page and from Discover Dominica Authority.